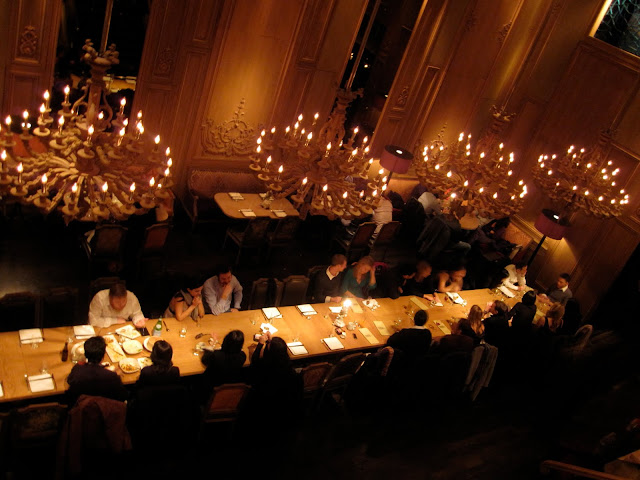 So after a New Years weekend in Boston we returned to New York with some free time this week. On Tuesday we finally got in to see the 3D Imax showing of Avatar. Not a great script/story, but the images and the 3D technology were pretty spectacular. Equally spectacular was our post-movie meal: Red Lobster. I am engaged to a girl from Ireland and she isn't quite familiar with the American chain restaurant fascination. We've made it to quite a few, but Red Lobster was the seafood jewel in the crown of mediocre, mass-produced, family restaurants. I would love to say it was better than expected, but in the end, it was Red Lobster. The cheddar biscuits were pretty good, but otherwise, the rest of the seafood was passable. 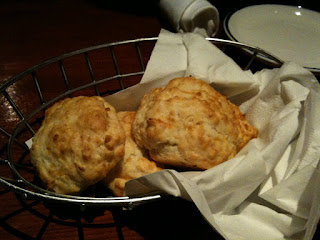 Thursday night was a long-awaited visit to DBGB in the East Village. Cool space and a very hip crowd. Felt out of place for a few seconds but then I remembered who I was. The bar had their own version of one of the newest cocktail trends in the city: the jalapeno-infused tequila drink. It was great. We had a few fancy sausages which were really good but some soggy fries which were disappointing. 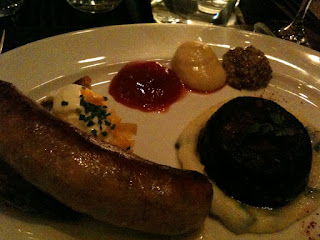 Saturday night was Cabrito. This is one of my new favorites in the city. By the same people that run Fatty Crab, Cabrito is a low-key, excellent Mexican restaurant with good drinks. The name means "baby goat" which is what I would like to name my first child. We started with some fish and goat belly tacos which were really good. Spicy proteins with fresh vegetables. Our main courses were red chili short ribs and the restaurant's namesake, the cabrito. The short ribs came in the soupy, spicy, red chili sauce that it was braised in. The meat itself was super-tender, not too fatty and perfect in a tortilla with some of the accompanying crema. The cabrito was equally fantastic. Apparently rubbed with garlic, sour orange and chili and then roasted, it was flavorful, the right amount of gamey and had a nice crispy crust to it. I added some of the chili sauce to it and it was perfect. Great meal. Also a good place for a group so you can share a few dishes.
After dinner, Gillian, Caroline and I went a few doors down to this newish dessert/drinks place called Sweet Revenge. Very cool place with beer, wine and lots of desserts. Their cupcakes are their specialty and it's hard to turn down a cupcake after a Vesper, some really good scotch, a great dinner and few more drinks. We had their version of a red velvet and an ice cream sandwich. A quality nightcap. 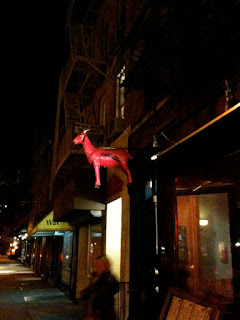 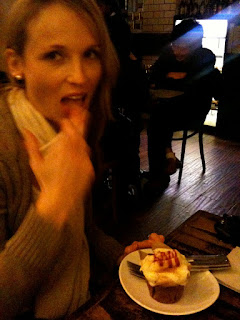 To end the week, we headed up to Windham for a day of skiing on Sunday and on the way back hit up one of our favorites, the Cheesecake Factory. We originally had a more ambitious plan for dinner back in the city, but we figured we were still wearing our ski gear and we didn't want to be judged. As usual, the Cheesecake Factory delivered. We had a group of 7 people, so we shared a bunch of stuff, and all of it was consistent and good. Our favorites were on the table: the thai lettuce wraps, the bang bang chicken and shrimp and the red velvet cheesecake for dessert. We came home stuffed and happy. The perfect end to a great week of dining and enjoying life. 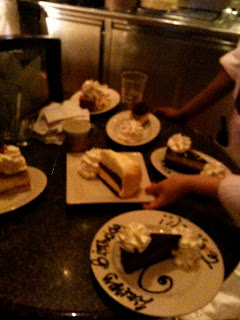